There’s no doubt you’ve heard of Construction’s Fatal Four. Falls, struck-by, electrocution, and caught-in/between are hazards you’ve been trained to watch for and avoid from the moment you stepped onto the worksite (and maybe even before). However, there is a danger that the construction industry has been reluctant to talk about: suicide. It’s time to dispel the myths about mental health and bring facts into the light.

Suicide by the Numbers

Each year, about one million people die from suicide worldwide. That’s one death every 40 seconds. In fact, it is one of the top three leading causes of death among those aged 15-44, both male and female.

Depression and substance abuse are associated with more than 90% of all suicides.

Worldwide, 55% of suicides occur in people between the ages of 15 and 44. 45% are over the age of 45, and youth suicide is increasing at a higher rate than any other demographic.

In the United States, males are more likely to die from suicide than females — four times more likely, in fact. (WHO) 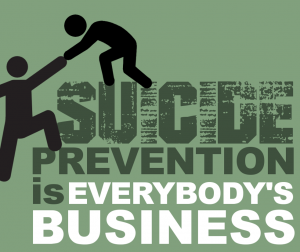 Construction workers have to deal with a number of stressors that can contribute to mental illness and suicidal thoughts. These can include long work hours, a heavy workload, and job insecurity.  Additionally, those in the construction industry have to face down the stigma of mental health.

With anxiety and depression still being viewed as something you can just “get over,” it’s no surprise that the rough, tough construction workers ignore their mental health issues or — even worse — develop unhealthy coping mechanisms like opioid dependence. Left untreated, mental illnesses will lead to suicidal tendencies, more often than not.

How to Make a Difference

Everyone on the worksite — from employers to management to coworkers — can help prevent suicide. What can you do to help?

If you or someone you know is struggling with mental illness or suicidal thoughts, don’t hesitate to contact the National Suicide Prevention Lifeline. There is no reason for anyone to suffer in silence.

If you would like more information on mental health and suicide prevention, visit our website. We also have a training about opioid awareness.

This blog post is part of our ongoing series covering suicide prevention in the construction industry. Stay tuned for posts on recognizing the signs and symptoms of suicide; myths and misconceptions; and ways to maintain mental health.